"Don't Forget Me" ~ About the Sculpture 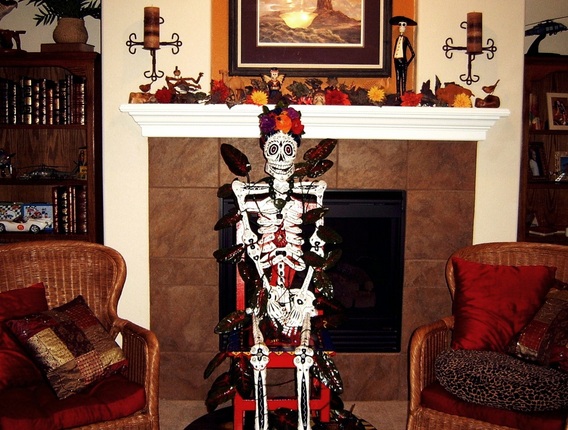 This homage to Frida Kahlo is constructed from papier mache, wood, wire, and clay.  In her ribcage is a heart with a miniature reproduction of a portrait (painted by her) of her husband, Diego Rivera.  Diego was Frida's "lifeblood", therefore the arteries and vines run from her heart, throughout her body, eventually wrapping themselves around her legs.  The vines bind her to the chair and anchor her to the earth when she so wants to fly!  Although Frida’s early beliefs are deeply rooted in Catholicism, later in life she became less 'religious', preferring instead to subscribe to the animistic and naturalistic ideology that our bodies have a symbiotic relationship with the earth:  We nurture the earth, and, in turn, the earth nurtures us.  For this reason the arteries and veins running through her ribcage bleed from red to green. The 'veins-to-vines' motif is reminiscent of Frida’s painting, “Roots”.

The necklace she wears is one of her favorites; a pre-Columbian antique favored in many of her paintings and photographs.  Frida is decorated in classic Mexican Dia de los Muertos style as this is one of her favorite holidays, she loves a fiesta and almost always displays a sugar skull by her bedside.  The many bugs and spiders scattered throughout the sculpture are in keeping with the whimsical view of life, death, and, to some, the macabre beliefs that are celebrated on Dia de los Muertos.

The brightly painted chair on which Frida sits has its humble roots in Mexico. It has been decorated in traditional Mexican colors and designed to honor Frida and the culture she loves.  This chair is Frida’s throne.  On her throne I have quoted an excerpt from a poem she wrote to compliment her painting "The Little Deer" as well as a few choice lines from her diary, including the works’ title, “Don’t Forget Me”, chosen because this is often how Frida signs her personal correspondence. She has a great, almost desperate desire to be remembered, perhaps because she knows it isn't in the cards for her to remain long among the living.  On the back of the chair is a quote from the final page of her diary: “Viva la Vida”, Long Live Life.

The base is an important component of my composition and is painted in the palette and style found in Frida’s painting, "The Love Embrace of the Universe, the Earth (Mexico), Diego, Me and Senor Xolotl".  This half-day/half-night sky, again, represents the binary symbiosis that exists in Frida's universe.  (It may also remind the viewer of the eastern Yin and Yang.)  Senor Xolotl is Frida’s favorite dog, appearing in many of her paintings and photos.  I've placed him standing by her feet, ever faithful.  The corn snake on the right side of the base signifies the darker side of Frida’s life – the pain, frustration, the damaged leg – whereas Senor Xolotl appears on the lighter, happier side.

Frida's back is rigid in the chair, this is by design.  Most of her self-portraits depict her in this pose, perhaps because of the injury to her back, or perhaps because of early classica' artistic influences. Frida holds a burning cigarette. She often smokes in public, clearly defiant of current mores!  The red scar with gold stitches just below her right knee represent the leg that is amputated shortly before her death; her friends and family say it was this final blow that caused her to lose her will to live. In my sculpture her right leg is present and undiseased – now she can fly.